Another great weekend of footy! Richmond and Carlton both won, and we both won our own footy matches. So we are both still undefeated.

Jack Riewoldt kicked a career high 11 goals, so he is leading the Coleman !

Carlton just won against Adelaide. There was only 6 points between them at the final siren.
Collingwood beat West Coast by 8 points but I personally think West Coast played better than Collingwood, they were ahead for most of the first three quarters, then Collingwood sneaked a couple of goals in the last quarter.
Meanwhile, Port Adelaide beat the reigning Premiers Hawthorn by 13 points. Port Adelaide deserved to win as they played a lot better.
Geelong beat North by 20 points. North made a bit of a comeback but Geelong deserved to win.
Gold Coast had another win against the Bulldogs. Gary Ablett had a scare with a possible report, but we just heard he is in the clear. Adam Cooney did get reported for a high hit on Ablett.

Swimming races are on this Friday so will report on this next week.

At school we are having a rugby clinic (league). We had a lady from Melbourne Storm come in and teach us some skills. It was great fun. It was pretty funny too. It goes over 3 weeks. Some things are similar to AFL and some things are quite different.

Thanks and have a great sporty week!
Posted by 2 Aussie Brothers Talk Sport - A Kids Perspective at 9:22 pm No comments:

Sorry we haven't blogged for a while. During LB's footy year they have been undefeated - with a 5 - 0 success rate. We are really happy about that as last year we only won 3 games the whole season. Today LB's team won by 15 points against a strong team. The first quarter they were ahead and with the wind. We fought back well in the second and third quarters. The final quarter was close but we kicked a couple of extra goals.
BB had a footy match today also. He kicked 3 goals. His team also won, so they have won 5-0 as well. The team they played today was a bit rough, with one of the opposition players being sent off, but our boys didn't react, and still won fair and square.
Now to the big league.....our number one team Carlton played well last week against St Kilda but have a bye this round. They are 13th on the ladder which is better than 16th where they were the week before. Richmond however is going down the ladder...what's going on there? (Poor Mum).
Gold Coast just beat St Kilda by 38 points so GC are now fifth on the ladder!
Our school Cross Country Districts are tomorrow. LB and BB both got in to the school team. We are looking forward to racing tomorrow. LB is running 2km, and BB is running 3km. I hope we do well! We will report our results sometime soon!

Posted by 2 Aussie Brothers Talk Sport - A Kids Perspective at 9:12 pm No comments:

Sorry we haven't blogged for a while. We have been super busy on holidays and at school but still doing loads of sport.

The big news today is BB (Big Brother) won his basketball grand final! The scores were 29 to 24. It was a very exciting game, the scores were level near the end but we managed to be ahead at the final siren.

In LB's last game for the basketball season we won  22 to 2. LB got 5 goals and it was my best match of the season.

Finally footy is back! We are not happy at Carlton's games so far. Dustin Martin got a goal in the last minute which won the game for the Tigers in our traditional grudge match. We are a split Carlton Richmond family so it is always a tough night for us.

On our holiday we went to the Richmond Gold Coast game. Gary Ablett and Brett Deledio had fantastic games. There was a bubble around Gary Ablett and he could do no wrong except kicking one out on the full. The ground was small but in good condition. It was fantastic that we could run on the ground after the match. We raced to the centre then got to kick the footy around. Unfortunately for our Tiger supporters in the family, Gold Coast won the match again. They have a good track record against Richmond.

LB (little brother) had a practice match for footy season last weekend. They won 82 to 0!!!!!!

BB also won his practice match by about 3 goals. We played a very good team, they were good at running and marking. We played well, and we have two new players.

LB is getting into his swimming. I had my first swimming race in squad and won my first event which was freestyle. My second event was breast stroke, I came third. And finally in butterfly I came second. I was nervous and was starving afterwards! It was good fun and I definitely want to do it again.

The World Cricket Cup starts tomorrow so we will report on that soon!

Good morning sports fans! Did you hear about the cricket last night? We beat South Africa! and they were top of the ICC ladder and we were third.
Warner got a double century and man of the match. Harris got his hundredth test wicket. Clarke made a century - then a golden duck!
When we were bowling in the second innings it was so exciting - almost all the fielders were in slips or silly mid-on and the South African batsmen weren't even trying to score runs, they were just trying to block the ball and make it a draw. I thought it would be a draw then at drink break the commentator said they had 78 overs left to bowl SA out so that got my confidence up that we could win. One of the commentators said the South Africans were playing French Cricket!
When I woke up this morning I checked the scores straight away and we had amazingly won! What a great tactical game. Australia used a lot of spin bowling with Shane Warne giving tips to N. Lyon on the boundary, and coaching S.Smith before the game.
Go Aussies!
Posted by 2 Aussie Brothers Talk Sport - A Kids Perspective at 7:55 am No comments:

Hi Everyone! A lot has happened since our last blog.

In International Cricket Australia won the first test against South Africa. Johnson bowled fantastically again. However in the second test Australia did not do so well, losing to South Africa. Michael Clarke is not batting well at the moment. A lot of the batsmen are getting out for low scores. Rogers set a good example with 107 runs, so did Warner with 66 runs in the second innings.

The good news is FOOTY IS BACK - even though it is the nab Cup. We barrack for Carlton and we are fanatical supporters. Carlton lost to Adelaide last night 99 to 61. It was not a great game of footy especially for Carlton. Daisy Thomas had a good game and we are excited about him being a Blue.

Richmond smashed Collingwood on the weekend by 48 points (8 goals), 124 to 76. This made my Mum and sister very happy. Especially after Melbourne beat them in Round 1 of the nab cup.

Right now Port Adelaide is beating Essendon 39 to 33, and it is half time.

BB (Big Brother) is going to the footy tomorrow night - Bulldogs versus Freo.

BB played basketball on the weekend and sadly lost by 6 points.

LB (Little Brother) played T20 cricket on the weekend. LB's partnership with LF (Little Friend) was 50 (LB got 34) to come from behind to win the match. LB hit six fours and an 8 (an 8 is when you hit it over the umpire to the boundary). That was the end of the season and we are undefeated.

Tomorrow LB is in the District School Swimming in the freestyle relay. Please wish me luck!!!!

Posted by 2 Aussie Brothers Talk Sport - A Kids Perspective at 8:10 pm No comments:

Hello sports fans! I can't believe last night's results. I went to the Stars Hurricanes game and it was not a good one for the Stars. Hodge made a fantastic and quick 51 runs off around 35 balls. He and Muirhead and Hussey were the best players for the Stars and the only ones that I thought played at their usual standard. Malinga was very disappointing in the bowling, but got an exciting and close run out.

Onto our own sport......Little Brother (LB) had his first match back at basketball - a close match but we lost 15-13. It was hot at the stadium. I played ok but no goals. LB also had T20 cricket on Saturday - I had a really great time, 40 runs off 2.3 overs, with two 4's. I got 2/0 over 2 overs when I bowled. I LOVE playing cricket. I like fast bowling, I try leg and off spin, but am just learning.

BB (Big Brother) had basketball training but no match last week. I am looking forward to the first match for the year on Saturday. Lucky its a morning match - it's going to be 40 degrees!!!!!!!!!!!!!!!!!!!!!!!!!!!
For interschool sport I have been put into the Newcombe team. I missed out on cricket because there were too many people in the team!!! So I am now I am learning a new game. Oh well, at least I get first preference for the footy team next term. Can't wait for FOOTY!!!!!!!!


Posted by 2 Aussie Brothers Talk Sport - A Kids Perspective at 8:06 pm No comments:

Happy Australia Day everyone!
Thanks to Cricket Victoria who organise Junior T20 cricket, I was invited to the Stars versus Scorchers match today at the MCG. We were taken out onto the ground and was given a Stars hat. My player Mohammad Hafeez didn't know he was supposed to sign the hat so the guys from Cricket Victoria took my hat down to the bench and got Viv Richards, Rob Quiney and the water boy Andy Lee to all sign it. My parents were very excited because they are BIG fans of Viv Richards. AND Adam Gilchrist gave me an autograph - he was really nice.

I got to stand out on the MCG and do some warm ups and exercises. Hopefully next time I am out there I will be playing for a team! (Either Melbourne Stars, Carlton Blues or Australia). Thanks for a great day Cricket Victoria! 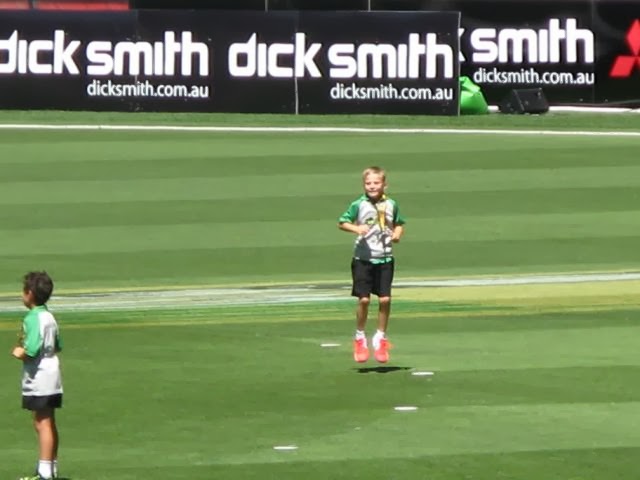 Thanks Uncle Mike for the cool runners!

The Stars finished the season unbeaten going into the finals. Hodge batted well making 61. There weren't many sixes unfortunately because I was ready in the crowd to catch one! We play the Hurricanes this week in the semi-finals, and because we finished top of the ladder we get a home final at the MCG. The other semi-final is Perth Scorchers versus Sydney Sixes at the SCG. 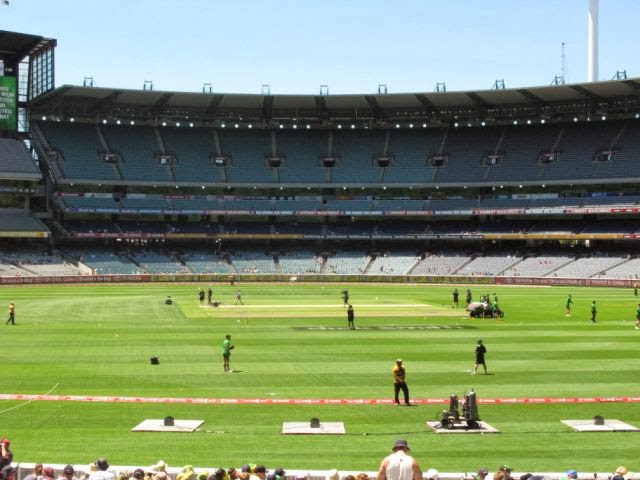 Posted by 2 Aussie Brothers Talk Sport - A Kids Perspective at 8:46 pm No comments:

2 Aussie Brothers Talk Sport - A Kids Perspective
We are two Aussie boys who LOVE sport - playing it, watching it and talking about it. And now we want to WRITE about it too.